This Marvel reader has taken the plunge and dipped toes into this New DC universe that’s supposed to be accessible and fresh. I’ve read all of the books released so far; some of them work quite well, some not so well. The key question I asked of every book though was whether DC has done enough to keep me interested and make me want to return for month 2 with each book. Thoughts below…

The big gun, released on its own, designed to be the big name book that sucks you into the DC Universe. And I’ve got really mixed feelings about the content.

First off, the art, and I think that Jim Lee is a perfect choice to have on the art for this book. It’s hyper-detailed, exciting, and Lee has the ability to keep his story clear from panel to panel. I don’t buy the whole “Image-style” criticism for the look of this book for two reasons; firstly, if this initiative is bringing back lapsed readers who left in the 90’s, then surely the reference point of Jim Lee is a positive, and secondly, the art is a pretty spectacular example of how good comics can look, particularly in the digital version I bought through the DC app.

The plot however leaves a lot to be desired. In that there’s not really a plot at all. Batman and Green Lantern fight for a bit, then chase after some creature who has some sort of magical thingy, then they look for Superman. Oh, and in between Cyborg in pre-Cyborg mode plays football. Despite the seven characters on the cover, only three appear in costume. It’s a massive disappointment that nothing of consequence happens, that the team is not together, and that the story feels like it’s going to be a 6-part arc. That’s not enough content to make me really want to stick it out, and I’m someone who’s used to slow pacing in comics.

For a lapsed or new comics reader to come in and then face a month-long wait for part two (if they even realise that there’s a month long wait) is too much to expect in this fast-paced, short-attention span world. Unfortunately, Justice League #1 is flash without substance. I’ll come back to read more, but I can’t say that it’s very successful in its mission to be a flagship title. It’s off too little consequence to be that book.

I’m not a fan of Superman. Never have been, I just never got him. This…piques my interest. The young Superman taking his place in the big city is good, it gives him a context I could never find in the original. I know that Grant Morrison is throwing in tidbits for previous fans, but even though I’m not getting them I have no problem following this book, and it actually leaves me wanting more. The art work by Rags Morales meshes well with the style of Morrison’s script. I’m not sure if someone coming in fresh to this will expect a  Superman very different from the character in the public consciousness. I’m also surprised that Action Comics was released before the eponymously titled Superman book, as the title would make me think it’s a secondary book. Still, I’m looking forward to coming back for more on this one, especially to see Superman become more powerful than a locomotive.

I have never heard of this character before now, but I like what I see. It’s a pretty goofy kind of concept, but what makes it work is the surprisingly adult nature of the book.  I have to admit, it was a bit stupid of me to not take much notice of the cover…it’s a slightly gruesome image, but I never connected it with the contents of the book.

I don’t really know how to review this book. It feels more like a Vertigo book than a DC book. But a new comics reader wouldn’t know Vertigo as a publisher name, so that’s not really a problem. The script by Lemire is a cracker, creepy and mysterious, and Foreman’s art perfectly suits the script. This is a great book. I just don’t know who it’s supposed to be pitched at. But a certain return next month for me.

Gail Simone is one of those names in comics who can pretty much do no wrong currently. I don’t know enough of her writing to really say enough about it, but one the strength of this first issue I can’t tell if this book is suited for her. It’s a callback to events in the old continuity, I get that much, but it’s also very consciously setting a character up in a new status quo. This is mixing purposes up a bit. I feel like there’s a history I should know about, but realising that there’s been a reset button pushed, I’m confused as to what that history should be. Batgirl as a concept has always felt gimmicky to me, and this book does nothing to dispel that notion. It’s a solid comic, and I’ll give it a couple more issues to grab me, but it’s a bare pass at this stage.

This is a thin book. Super thin. Big panels, barely any scripted word balloons, a few captions. It’s all rather bland. I don’t care about the lead, I don’t know why Batman is sponsoring him, and the final page splash (lazy, lazy storytelling, see one of my previous posts on my thoughts on splash pages) doesn’t do anything to make me want to come back. So I won’t. In three words, a bit crap.

Like Action Comics, I don’t know why your first Batman book wouldn’t be “Batman” or “Batman and Robin”…again the title makes this feels like a secondary book. The Joker is a strong choice for the antagonist though. Tony Daniel has instantly made me want to follow the battle between Batman and his arch-enemy, so job well done right away. There’s an interesting cliff-hanger as a bonus as well. The art by Ryan Winn is serviceable and I have no complaints. A rock-solid comic which I’d be very happy to buy month on month.

Short and sweet on this one. The art by Jurgens and Perez is old school, detailed with a very 80’s feel to it. And for some reason I don’t know if Green Arrow is the book for this sort of art.  I understand the set-up by JT Krul, but really I’m not that interested. It’s all a bit dull. I want to like it, but it’s just very meh for me. Why would I come back?

This will be quick. It’s histrionic rubbish. I don’t understand why the concept would be compelling, and none of the characters are very likeable. Not good.

I wanted to like this book. I really did. And I do, kinda. Team books have always been my thing, secondary team books even more so since I grew up with West Coast Avengers.

Certainly not a bad book. Not a great book either. But I’m willing to see where it’s going to go as a book I can read that doesn’t make me think but is passingly enjoyable.

I hadn’t read the solicits on this, and had no idea what the book was. It’s a war comic where the super-powered impinge on this world. It’s focused, and an interesting concept. War comics have never done it for me, but this is worth coming back to see how it pans out.

What on earth is this? Seriously, what is this book supposed to be? A Kirby pastiche? Perhaps. An incoherent babble? Certainly.

There is no New DC book that is more impenetrable and less interesting than this. If Dan Didio has written a comic before, I wouldn’t know. It’s all over the shop. I think there’s supposed to be some sort of mystery about OMAC’s controller, about who is being controlled, I don’t know. This feels like a ten year old wrote it, throwing in as many “cool” moments he can: “Then he fights a gajillion creatures, then he rips stuff, then he smashes stuff, then he rips more stuff, then there’s a space station…”.

This feels like the token book, with the young brash super-hero learning his trade and enjoying his powers. As a Marvel reader, it reminds me of Nova. No bad thing.

Too much going on. The book felt like it could have used less scenes, I could barely keep everything straight on this one, and a few days after reading it I can’t really remember the plot at all. DC, I’m supposed to be energised by these books, to bring me back by making me learn who these characters are and why I should care about them. This book doesn’t do that, and it doesn’t make me want to put in the effort to find out more. Pass. 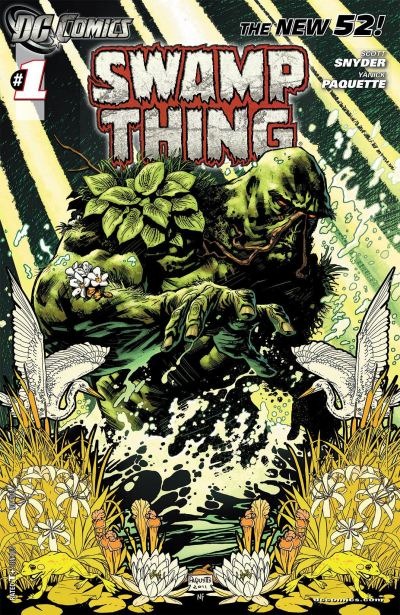 The final book. And this, I liked.

I know Alan Moore had a storied run on this book back in the 80’s, but I’ve never read it. I had no connection to the character, just a vague notion that Moore’s run was “important”.

Snyder doesn’t give me any sense of that, which is great. Swamp Thing feels like it stands on its own two feet. The ideas are interesting, the story is intriguing and I want more. Paquette’s art is both spooky and clean.

I have no problem recommending someone pick this up from scratch, it’s a little ripper of a comic.

It’s actually fairly tough trying to review, even in super short bites, 14 books at once. I hope this has been a useful exercise.

I’d give four books top marks, six a bare middling pass, and another four a big fat fail. I’ll try all of them at least once more, but past that I can’t guarantee any more for Batwing, Hawk and Dove, OMAC or Stormwatch. They’re pretty awful.

Action Comics, Animal Man, Detective Comics and Swamp Thing though are all super reads, and make me glad that I’ve given DC a good try with this new initiative. 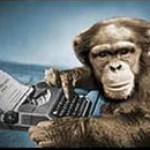 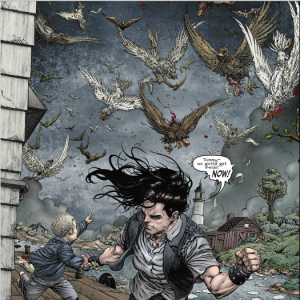 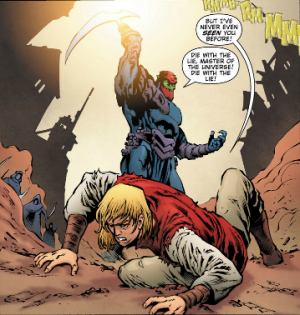